back to home page of Broken Back Ranch Quarter Horses

My Favorite Outside Stallions  -  Other Ten Sleep, WY Horses 4 Sale

*Be sure to read the write-up on my home page

for more info about my breeding program.

Below you will see AQHA, AQHA Appendix, APHA and quality

The grade colts are grade because their dam's, great granddame's,

Not grade because I somehow failed to register them or their colts,

not grade because I failed to pass on their papers!

These colts are never registerable with AQHA or APHA.

I suppose you could do a color registry, but that is up to you.

They are from quality grade stock that my family

has been raising in Wyoming for 4 generations!

Only 1 horse left to sell, pictured directly below! 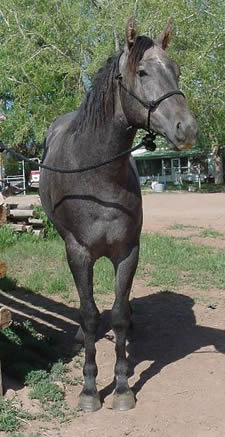 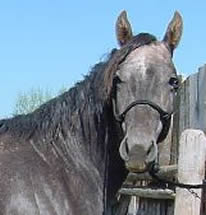 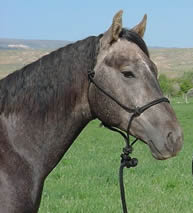 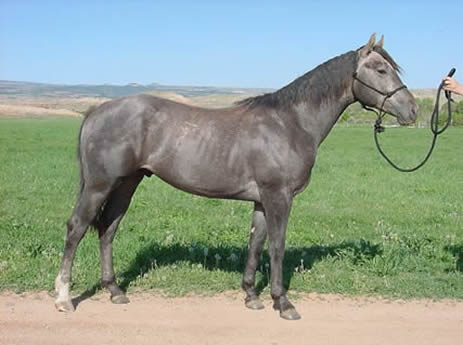 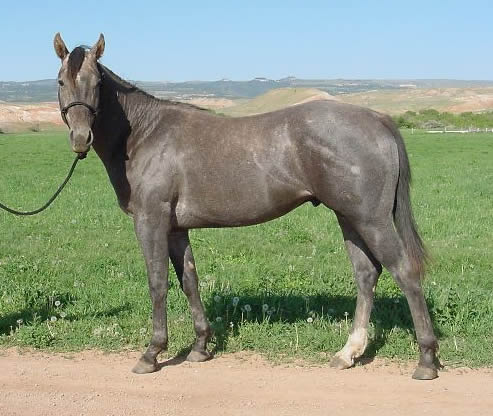 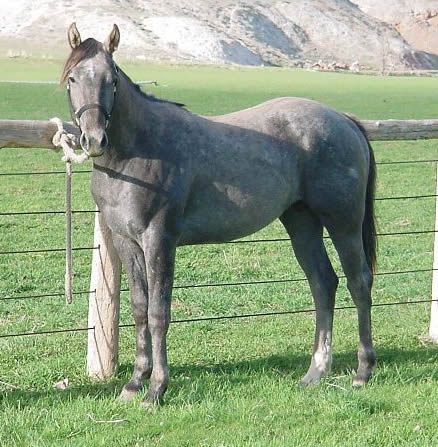 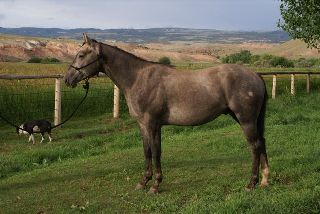 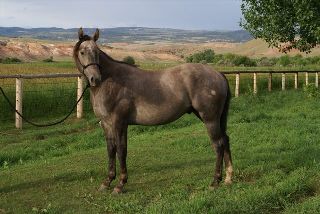 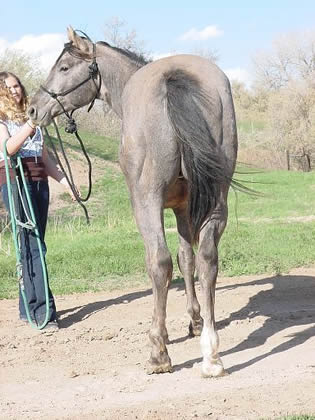 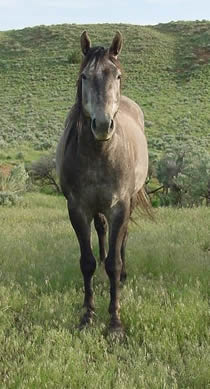 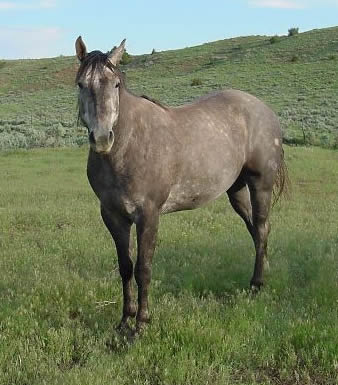 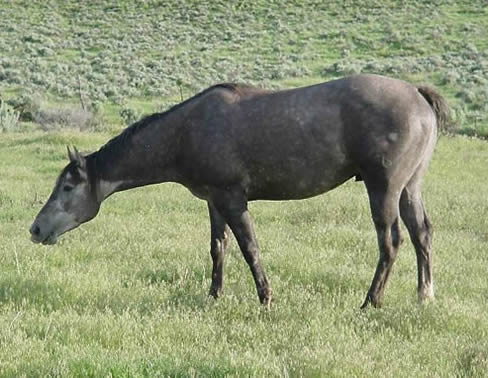 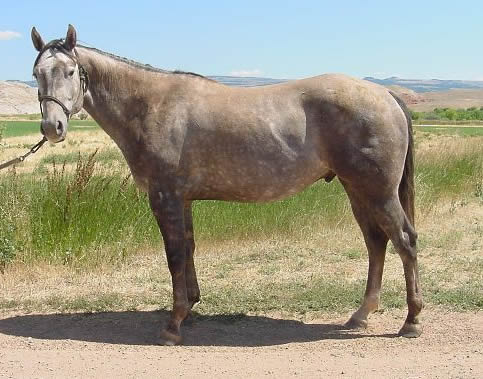 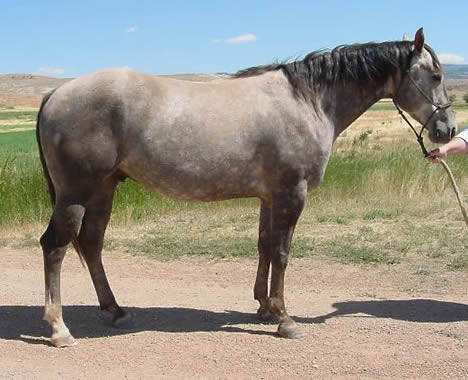 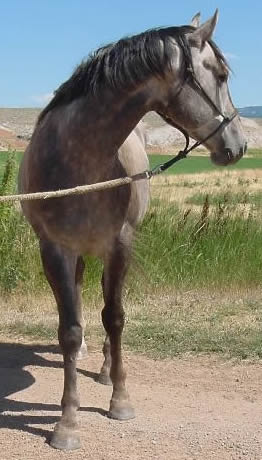 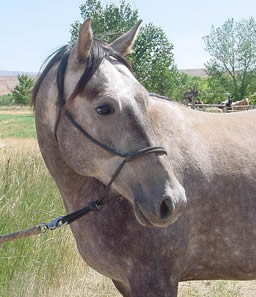 have a good wall under him!

Quick Silver Cause (05 Stallion) - in Texas

Top Cause Dream (06 Red Roan Stallion) - still in Ten Sleep on our ranch!

The rest of the colts you see below are all SOLD!

But I don't mind if you look anyway!

Flashy blood bay colt.  He will be pretty and should be a smooth ride.

Excellent barrel or rope prospect.  Possibly even a reining prospect!

Notice that he has Dot's Jessie on his papers - AQHA World Champion Reiner!

Check out his full, little brother on the 2008 Colts page - Blazin Roper!

I ride his oldest full brother and he is too fast and quick for me!!

This colt's dam is the lead mare of the herd!  No need to say more!

He doesn't look like much, but give him time.  Give him 3 years and then

you'll understand why I get really excited about this mare's foals every year!

He cut both hind hocks on the barbed wire fence.

Not a very serious cut luckily, but it will take some time for the left hock to heal.

He is currently being spoiled and pampered in the coral

He will be looking mighty sleek & keen by April 09.

If you are looking for a barrel racing prospect, jumping prospect or just a good ground covering

ranch gelding that will help you get the job done fast then he could fit the bill.

This is one pretty bay filly with rope & running bred bloodlines!

She should be able to do just about any ranch or rodeo job with this classy filly!

She is a very sweet filly with some spunk!  Loves to be scratched and brushed!

No need to catch her she is in your hip pocket!

She has the following AQHA & TB horses in her pedigree:

This colt is showing lots of blending or roaning like his sire and dam!

His dam is built like a barrel horse and his sire is more refined & smaller built.

You decide what to do with this pretty colt!

This is Shadow's 3rd foal all total, but her first colt out of Classy Jack Frost,

so I don't know what to expect out of this pretty baby.

This colt and one other are Classy Jack Frost's first foals in the 2007 Colt Crop.

Frosty Shadow is a gentle, but alert with a kind eye like his mother's.

Shadow has produced 2 other fine babies sired by another

stallion and both of them have been exceptionally sweet dispositioned colts,

easy to handle and lots of athletic ability.

This colt loves attention and is in my hip pocket all the time!

Quarter Horses and Thoroughbreds are shown in blue text.

Yahooo...thanks for giving him a good home!

Quality disposition worth your dollars!

This colt is an excellent kid horse prospect!

while running with the herd of horses that we kept in the hay fields that spring.

I am very unsure as to how sound he will be in the future.

He is healing and mending, but it isn't going to happen quickly.

To top the problem off, his dam had only half the milk needed to raise him properly,

due to the injury and the colt going off milk for a few days too many.

I am pampering him and doing all I can to grow him up as well as I can.

I'll let you know come fall when I wean him if & when he is ready to go to a new home.

**This cute little bay roan is ready to go.  He is growing fast and healthy!  He has some scars from the injuries,

but otherwise his jaw is healed and he looks good!  Much better than my July pictures show. (August 2008)

No doubt in my mind that he will be a smooth ride, fast walker & a cow eating machine!

Flashy gray colt with potential to excell in any type of ranch work, rodeo or just plain pleasure use.

Favorite family bloodline on his dam's side.  His dam, Queenie, is a great granddaughter of Peppy P-212.

You can't ride papers!!  And who needs them when they look like this classy fellow!!

Very soggy built filly!  As you see I have line-bred half bro to half sister again.

They are always big soggy colts

She should be easy to break to ride and smooth!

She is a very sweet filly, easy to manage, willing to do whatever you ask of her.

Typical of this cross!

**This filly has major wire cuts on both hind hocks, left hind is worse.

I will keep her through the winter and try to heal her up more,

then she'll be available to sell spring 2008.

AQHA calls him a red dun on his papers...

although he obviously has both dun and roan coloring.

Gentle giant of a colt!  Not flinchy when touched.  Acts like he'd like to be a real pet!

This colt was the colt of the buy of the year!

Way better idea to come and see them in person than to judge them by my pictures!!!

Should mature to be 15 hands or better and would make an excellent rope prospect.

The kind you won't ever want to sell and you'll wish he'd stay young forever!

He should be built sturdy enough to pack a heavy load when he's mature!

Yep, what a beauty!!

All around filly with kid horse potential and super performance prospect written all over her!

Her sire is a grade quarter horse and her dam is an AQHA Appendix broodmare.

Your little diamond in the rough!  ;-)

This filly is a full sister to my neice's 'Little Buck' gelding.  If you know Little Buck then you'll know

what a sweet heart this filly can become in the right, gentle, patient hands!!

She'll never be ugly and will most likely also be smooth to ride like her sire.

Lost this filly in Feb 08, but wanted to leave her pictures up for reference to

the type of colts that Comet's Little Lady produces annually.

This filly is a running machine!  We recently (summer 07) moved the mares and colts to another pasture

and as I lead the herd in front I got to watch this filly run.  She looks smooth and has a sweet,

easy motion to her lope.  She stayed in that easy lope while her dam and the other horses trotted.

She'll most likely be true to her sire's smooth easy ride that he passes on to his babies!

Don't know how many more foals Comet will produce in the years to come.

Kid horse for sure!  Picked up her feet today for the first time.

No fight to her, just ready to please!

Very strong filly with a strong back.

so I suspect she'll be another people loving Buckskin Bo filly!

Snowflake's Fancy finally had a filly after 11 horse colts!!

This little plain jane sorrel filly will be staying to

raise more 'Fancy' horse colts for me in the years to come!

She has one last full sister for sale that you will find on the 2008 Colts  page!

Price: Not For Sale! - Decided to keep this one for my nephew!

Not a perfectly straight colt, but he will be smart and easy to break.

He'll be able to run and have plenty of cow sense.

He is toed out in his left front leg from the knee down.

He has 2 siblings that are the same way and it doesn't seem to affect their ride.

References are available on request to the current owners of his siblings.

This colt is going to be a beauty, despite his big gangly Hancock/TB built dam.

This Page Designed by Lynette Mills

back to home page of Broken Back Ranch Quarter Horses